Turns out the guy has picked the lock, and made it his home: bedroll, pictures, personal items.

This breaks my heart. I can only imagine what it's like to have to sleep on a cold concrete floor every night, let alone  park bench or a sidewalk. At the same time, should something happen in that boiler room. it affects the whole building, and the tennants in it.

We will change the lock on the boiler room door to a deadbolt, perhaps put a gate in the passageway leading to it as well.

But first we will also box up his belongings.  I will put a few bucks in an envelope, along with a note explaining why he needs to move on.

Like most homeless, he's not on the street (or in the boiler room) by choice. He's there because, somewhere along the line, he's had a fall from grace. Maybe mental health issues are involved. If so, I truly feel for him, because the governmental safety net for the mentally ill is broken in too many ways.

He is someone's son. Perhaps, someone's brother, father, or uncle or nephew.

He cannot deal with his problems. And his family is probably brokenhearted about it andworried about him, but also weary of the burden of carrying him.

Out of sight, but truly out of mind? We all know that's not the case.

He is the ghost of failure: not his own, but ours, as a society.

We need to fix it. Whether we want to believe so or not, it is a reflection on each of us

The despair felt by the parents of the mentally ill — especially those whose illnesses, such as schizophrenia, manifest into anger and has caused them to do physical harm to others — is unfathomable by the rest of us.

These are not bad parents. They are people who love their children, and have done their best to get medical attention for their offspring, despite the expense (psychopharmaceutical drugs can be as much as $100 a pill, even if needed daily), and the stress of all the red tape traps devised by our American health insurance system–not to mention the lack of comprehensive medical care for the mentally ill, once the financial hurdles have been jumped.

Below is an excerpt for the Mother Lode column in the New York Times, in which several parents with mentally ill children who have done similar acts give their perspectives on the Tucson, Arizona killing rampage that injured fourteen, including U.S. Congresswoman Gabrielle Giffords, and killed six others.

We can't take healthcare off the table now. In so many ways, our lives depend on our society — and elected officials — addressing this topic, and moving forward on workable answers.

I've also included a video, from PBS's NewsHour, on the Tucson and the missed opportunities to prevent it by assessing Laughner's mental health situation. Sadly, Laughner was putting his intentions out there with YouTube videos.

The irony: Arizona had cut $65 million from its mental health social services budget since 2008. 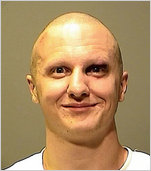 With Jared Lee Loughner’s unhinged grin staring out from so many Web sites and newspapers today, parents of troubled young adults are stepping forward, giving glimpses into the pain and impotence that comes when your child has mental illness.

In Chicago, the longtime local CBS news anchor Bill Kurtis shared all that and more with viewers last night, talking publicly for the first time about his son Scott, who was diagnosed with paranoid schizophrenia and who died in 2009 when he was 38.

In unscripted comments coming after a report on the reasons authorities don’t take action against bizarre behavior before it turns threatening, Kurtis talked of how his son heard voices and suffered from hallucinations, but was not violent. The turn toward violence in the mentally ill, however, can be unpredictable, Kurtis said. “I was told my son went nonviolent, and he was no danger,” he said. “But 10 percent of the crimes are committed by mentally ill people who do turn violent.”

After the newscast Kurtis told the blogger Robert Federer that he decided to speak out because Loughner’s story seemed so familiar. “I never wanted to exploit Scott and the illness, and always thought that if he wanted it to go public, he should be able to make the decision and talk about it,” Kurtis said. “We’d been living with this for so long that when I heard some of the witnesses and observers who came forward Saturday [to describe Loughner], I felt this was the perfect time. In schizophrenia, they say people seem to come in and out. So they can look normal and function normally and go in and buy a gun.”

One can only imagine that Kurtis is putting himself in the shoes of Loughner’s parents and wondering “what if?” That is definitely what Jeannette Halton-Tiggs is doing, and she wrote about it today over on The Daily Beast.

In a column titled “Mother of a Monster,” she describes to columnist Mansfield Frazier how her son, Timothy Halton Jr. was sentenced to life in prison for shooting a police officer.

…in truth my Timmy is not, and never was, a monster… what he was cursed to be is one of the literally millions of hopelessly and irrevocably mentally ill individuals in the world today. He suffers from a severe form of paranoid schizophrenia that renders him incapable of controlling his thoughts, emotions or actions when, for a variety of reasons — some beyond his control — he is off his medications. And I did everything humanly possible within my power to keep him on a treatment regimen, but, alas, to no avail.

The reality is, no one can be as deranged as my son, or as Jared Loughner apparently is, without many people being aware of his deteriorating mental condition — yet seemingly no one moved to force him into treatment. The burning question following a mind-boggling incident of this kind should be: “Why do we, as a society, allow known dangerously mentally ill individuals to make their own decisions in regard to receiving treatment?”

There is a powerful contingent of folks in the mental-health care delivery field in this country who posit that no one should be compelled to be treated for their illness unless, and until, they harm someone. This, in itself, is insane … and dangerous to boot. I screamed at the top of my lungs that my son was one day going to hurt someone, or himself, but no one in a position of authority to avert the tragedy would listen or do anything.

That is mostly because Timmy turned 18 and his mother lost legal authority to control whether he took his medicines or was hospitalized or even monitored. Halton-Tiggs cites data which show that “more than 40,000 dangerously mentally ill individuals are roaming America’s streets on any given day, untreated.”

All those individuals are someone’s child.

As Halton-Tiggs concludes: “I’m pretty sure I know what Loughner’s family is going though. The guilt, the shame, the sense of despair.”

Statistics mean that tens of thousands of other parents out there fear one day knowing those feelings as well.